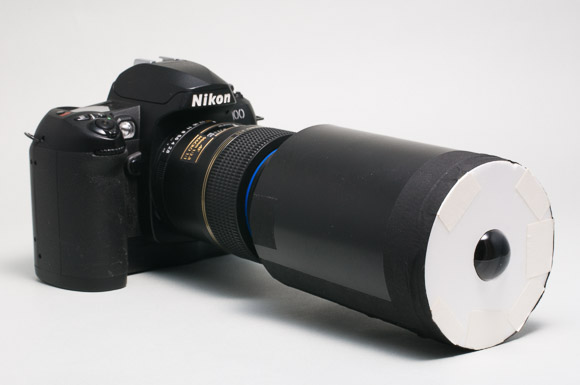 “Soratama” is a photographing method which I have designed in 2009. The clear ball fixed in front of the lens makes it possible to photograph sceneries in a ball, flowing in the air. As I was testing different lenses, I came up with an idea of using a clear ball as a lens.
This is a common technique used to take pictures among photographers all over the world. However, many people have set those balls on something, or hold them with their fingers when they photograph. For this, the fingers or the object used as a platform get reflected on the picture. The Soratama was designed to prevent this happen. It makes it seem as if the clear ball is floating in the air.

The first idea was to use a clear vinyl chloride. Pile up two vinyl chloride and cut out a circle. Then fit the clear ball into the circle. Although the quality wasn’t high enough, I knew it would be a good product. The next thing I did was asking a glass artist make a soratama.
This time, the quality was good enough to release the information of making process public. However it was very costly. Then I came up with an idea of using an acrylic ball and an empty snack box.
Despite the lookings, thanks to it’s chepness and easiness this method had spread gradually among many photographers.

We are holding a contest for soratama photo taken in 2020

We are holding a contest for soratama photo taken in 2019

We are holding a contest for soratama photo taken in 2018